A DOG AND HIS WILD HORSES

Each year, the City of Burlington in Vermont puts on a weekend-long Art Hop. One of the exhibits includes a celebration of the many parks and recreational opportunities made available in the city through the Parks and Recreation Department. For 2018, the theme of this exhibit is celebrating the wild places of Burlington.

With so many spectacular vistas and natural spaces in the city, it is actually the Andy A_Dog Williams Skatepark that ended up providing the creative spark to create something perhaps more original and unexpected than typical nature poetry.

Andy A_Dog Williams was a much beloved young DJ, skateboarder, artist and cultural icon who died in 2013 of leukemia. If you read tributes from the community after his passing, it is clear that he was an exceptional human being who touched the lives of all those he met. No wonder then, that the city built a skatepark in his honor. Nowhere in the city can the beauty of wildness be more experienced than at this park where lives of all ages, all colors, all gender identities, all origins, all gadgets of conveyance come together in harmony and freedom to celebrate life.

A DOG AND HIS WILD HORSES

A_Dog, your presence enters my awareness
parking almost daily before your altar
as the launching point to cycle the wind
and touch the face of the Creator with speed.

I come to have a sense of you
through the wild horses who gather in your field
and drink from your trough:

The flowing manes of the young fillies,
The streaming tails of the unfettered colts,
The shining bronzed coats dripping with sweat.

The unmistakable sound of the jumping slap
as they test their mettle
on the course you have set.

They gather round your trough
under your gaze,
drifting back,
joining nose to nose
to take a sip
and feel the cool breeze
whisper against their wet skin,
more sensuous than the flick
of the finest filly’s glance.

Andy, your story gets written
again and again.

In the tattooed post-punk papas,
who flash their brilliant colors
as they place their foals before them
and teach them to be fearless
flying across the plains of pavement.

In the Zen meditative mamas,
who flow as liquid air
so at one with their boards
that the heart aches with their beauty as
– unconcerned with the tumbled skinned foreleg –
they raise their young
to be strong and wild.

In the grizzled ones,
still riding the range,
hobbled here and there,
freedom and defiance flashing
in their ageless eyes.

All rolling the one-way line
into the future,
weightless on the wind
of your omnipresent love. 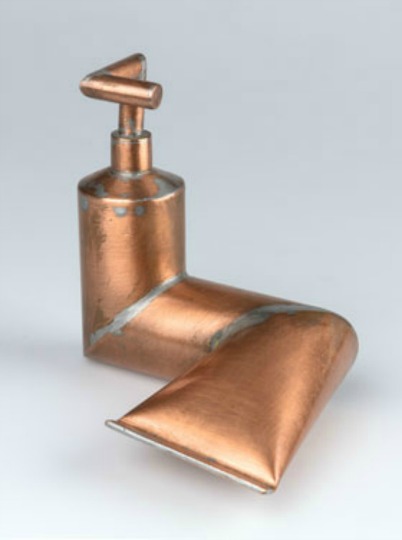 This original poem by The Poartry Project was written and read for a 10th-anniversary event of The Painted Word Series of ekphrastic poetry inspired by exhibits at the University of Vermont Fleming Art Museum in Burlington, Vermont. It was inspired by the sculpture above, Tube, by Edwin Owre.

Time crashes on the shore of your song,
shattered into glittering pixels
with knowing winks of selfhood
that fish hoarders dart in to grab for their
faux coral collections,
accreting their death by toxin
in reefs of ticking countdown –

Just as those sailor-soldiers did
at dawn,
seduced by the copper sheen
of your angled tail,
arranged just so by the golden mean
in a tableau of beautiful seduction
before your sheen dulled
and your wings were shorn.

And so now you have to learn
new angles
to try to catch the light of the
fire that still burns and smoulders
somewhere in your hold.

But the music of your millennial musing
now turned inwards on
the boulders of bones of broken men
has made you forget
who you are in the world.

Frozen in time,
frozen in face,
frozen in the space
of the angles of your body,
you dimly think that this is not how you want
to be remembered.

You must crash yourself
upon the shores of your own making
and dissolve into the pixel sea,
recombined, blazing, emergent
as the milky currents of
a billion electric galaxies
stream off your formless form.

I always felt more at home when I wasn’t in America.
Citizen of the world –
Citizen of nowhere.
Try on languages
like bejeweled peacock masks sparkling in the light –
Sapphire blue, emerald green, autumn gold.
“Your job is to bring the world back…”
Maybe to someday be able to bring Truth back.
But home is home.
Neither out there nor in here –
but both.
A seed of light –
expanding and expanding –
building itself into a neverending song of Beauty.

You never think much about accordions

until a masterful woman spins one from imagination,

with all its history

only to end ignominiously.

But that little green concertina is your constant companion now,

in a world where you love music

through a tin ear.

while waiting in a crowded San Francisco airport,

one of the accordion’s stories comes alive,

as an ordinary man with grey beard and balding pate

wends his way through some doleful memory or another.

No one pays attention—

you wouldn’t have before befriending the beleaguered concertina—

but it trembles your heart

as the player’s grandson sits on the dirty floor

counting money out of a scruffy baseball cap.

You feel you’ve missed your moment,

by not acting on what has changed your landscape,

creating intimacy in the epitome of anonymity—

the airport—when you had your chance.

But you can’t ignore the unlikely siren song

echoing in your head.

Seizing the poemness of the event—

reverting to your lifelong desire to live on a page

all the while realizing this is much closer to the bone—

you approach the man,

though he’s retired his little squeezebox

and the boy has pocketed the paltry change.

You hand him a dollar,

a little embarrassed to be marking the epiphany with

and, heart pounding and face flushed,

you ask him if he’s read the book.

Does he know his green accordion’s a star?

but he says he’ll find the tale.

He may think you’re a little strange.

Your history has finally been shaped by a fiction

and while some get it backwards saying art imitates life,

and others would find such a moment absurd,

nothing will ever be the same.

As shared in the poem, it was written in an airport terminal in San Francisco, with a letter in pocket from Michael Harper, Poet Laureate of Rhode Island and Brown University Creative Writing Chair, to the Chair of the Poetry Department at Stanford University, who had assured the letter-bearer’s acceptance into the Poetry Doctorate Program at Stanford. The letter was never used and the connection to Stanford never made, the intention of which (not using the letter and not going to Stanford) was already present in awareness in this moment at the airport. The poem references E. Annie Proulx’s gem of a book, Accordian Crimes. This event marked a first true hesitant contact out into the world and with ‘strangers’ as an ‘adult’ just after college. It felt like a breaking of the rules of engagement known up until that point and a willingness to step into appearing foolish after a lifetime of avoiding any such possibility. It was the beginning of a long series of paths into the world of energy and more spiritual living, giving rise to a deep love for humanity and a recognition that all lives and moments of contact are beautiful.

Poetry inspired by works of art, the art of nature and the exploration of beauty, perception and insight through the cartography of the unseen.

Keep up with all sorts of creative opportunities, events, prompts and news. We won’t share your data – ever.